By Todd Fratzel on Bathrooms 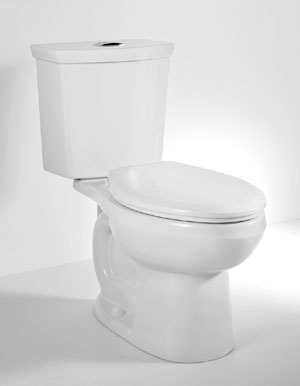 Based on the simple premise of “push 1 for 1 and push 2 for 2,” dual flush toilets have become a breakout green product success story in the US. Since most perform as well as or better than their conventional counterparts, while saving up to 25 percent on water, dual flush toilets are truly conservation without sacrifice.

H2Option, a new flushing innovation from American Standard is the first truly siphonic dual flush toilet, with strong push and pull action created by forceful but quiet jetted action under the rim. Using as little as 1.0 gallon of water on the low setting, H2Option scours the sides of the bowl to remove every last trace of paper and waste.

“If you’ve been thinking about trying a dual flush, but had concerns about performance, H2Option is what you’ve been waiting for,” said James Walsh, American Standard Brands director of chinaware. “H2Option is the toilet that keeps cleaner while going greener.” 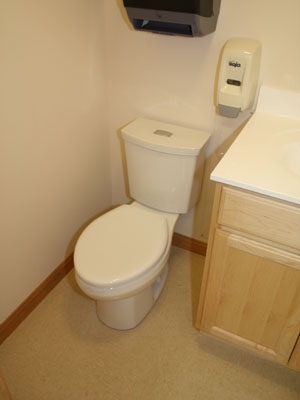 When I first sat down with the owners of the non-profit Montessori School that we were building an addition for the discussion quickly centered around a Green Addition. Being a non-profit school means making sound long term financial choices that would help keep operating costs down and ultimately tuition. Besides the obvious green approaches like insulation, windows and HVAC equipment we also wanted to cut water consumption.

One interesting “lesson” has developed with the young children at the school. Open discussions and lessons about how to use the H2Option Dual Flush Toilets. Young impressionable minds are fascinated with the discussion over when to use the #1 button and when to use the #2 button. As you can see in the photo above these new toilets have two buttons for the dual flush action.

The new H2Option Dual Flush Toilets from American Standard have been in the new school for two months now and they work wonderfully. Not only do the children find them fun to use but the staff have had no problems. The toilets flush very well and stay looking clean.

Overall I’ve been quite impressed with these new dual flush toilets. If you’re in the market for one I’d highly recommend the American Standard H2Option Dual Flush Toilets. This toilet is nicely styled and a great match for both residential and light commercial applications.

If you’d like to learn more about these fixtures then check out: