By Todd Fratzel on Masonry 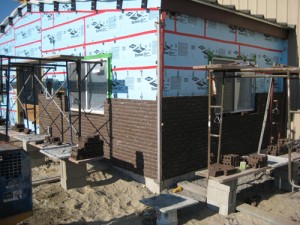 Brick facades and metal stud framing are becoming increasingly popular in commercial and residential construction. This type of construction is popular for several reasons including speed, cost and performance. I’ve written several posts recently documenting the metal stud framing, Densglass Exterior Sheathing and the Masonry Flashing Details. In this post I’d like to give you some photos and details about how the masonry is installed and “tied” to the structure. 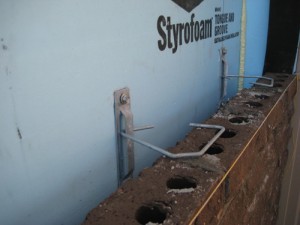 Masonry facades are fairly straight forward. The masonry (brick in our case) is supported at the base with some type of foundation or lintel. The brick is then stacked row upon row, typically one story at a time until it reaces another support point. Most masonry facades have an air space between the masonry and the building. Therefore, masonry anchors are used to keep the brick from moving out away from the building.

The anchors are fastened to the metal stud framing with long self tapping screws. Then the hook is installed in the vertical slot of the anchor plate as shown in the photo. The hook is then set into the mortar bed which creates a physical connection between the building framing and the brick facade. 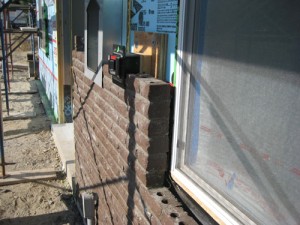 Be sure to check back in the coming days as I’ll do another post with all the finished masonry details. I hope these articles have helped everyone understand some basic brick facade over metal stud framing details.