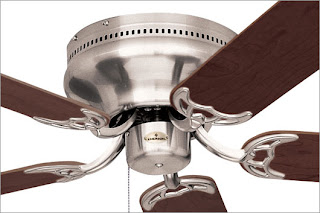 Today I learned something new about how to control the speed of ceiling fans. We have a ceiling fan in our bedroom that we use pretty regularly during the summer. It has three pre-set speeds, slow, medium and fast. Here’s the problem: the slow and medium speeds are so slow that they really don’t do much to cool us off. I like the fast speed but it drives my wife nuts. She says all it does is blow the hair into her face all night long. So I thought I’d just install a dimmer switch and that way I could “fine tune” the high speed to an agreeable setting.

Guess what? A standard dimmer switch will not properly operate a fan motor. In fact, it’s most likely going to damage the fan motor and it could even potentially cause a fire. I’ll admit I even went out and bought a dimmer switch and I sat down to just “make sure” I was doing the right thing when I figured this out.

Standard dimmer switches are designed for the wattage of lights. Fan controls are designed for the amperage of the fan motor. So if you want to control the speed of a ceiling fan make sure you buy a fan speed control that specifically says it works for fans. Fan controls come in quite a few styles. The most common type has been around for quite some time and that is the rotary or dial type. The next most common fan control I found was the toggle that has three pre-set speeds (slow, medium and fast). You can also get a fan control that has a slider control along with a toggle switch. 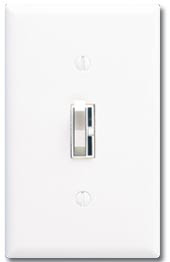 The type that I want to install is a toggle switch with a small slider switch next to it. I have a feeling I’ll have to order one of these but I’ll check with my electrician tomorrow to find out the scoop. The bottom line is you can’t use a standard dimmer switch to control a ceiling fan. You have to get a fan speed control switch that is specifically designed to operate fan motors.