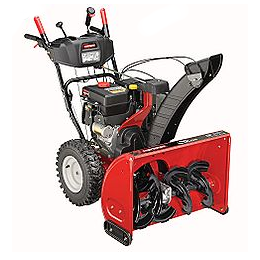 Several years ago I purchased a Craftsman 277cc 28″ Snow Thrower when we built the new house. Here in New Hampshire we get a fair amount of heavy snow with storms ranging from a typical 6 inch event all the way up to major snow storms of 36 inches or more! With that kind of snow fall you really do need a gas powered snow blower (thrower).

We have a large driveway which is about 125 feet long with a large turn-around at one end. Because of the size I wanted a minimum of 24 inch wide blower so I chose the 28 inch model. The blower can take up to 21 inches (deep) of snow in a single pass. This particular model has electric start and uses un-mixed straight gasoline. It has trigger control steering which allows you to steer the snow blower by controlling the drive wheels.

I’ve used this snow blower to remove snow that was really wet, heavy and almost 40 inches deep. The Craftsman Model#88791 has plenty of power and never bogs down. Of all the snow blowers I’ve used and owned this one certainly has the most power which really speeds up the snow clearing effort.

The Craftsman Model#88791 is pretty easy to operate. One upper handle grip controls the snow auger and one controls the drive belt. Below the handles are two triggers that allow you to control the steering (basically you can make one wheel turn faster than the other to make the machine turn instead of pushing and pulling the thing around the yard). That feature works pretty well although it can get confusing at times trying to decide which trigger to pull! My one gripe with operation would be driving in a straight line. The lower steel shoes that run along the pavement don’t seem to track really well. Don’t get me wrong, you can go in a straight line but I find the machine wandering more than I’d like.

The snow chute on this model works pretty well. It definitely gives you a full 180 degree range to throw snow and the adjustments are easy to use. My one complaint on the snow chute is it seems to allow some snow to shoot back at the operator when it’s turned 90 degrees to the right. Again this isn’t a super big deal because I hardly ever shoot snow completely to the right.

I’ve been very pleased with my Craftsman 277cc 28″ Snow Thrower. The couple of small issues that I have pointed out are certainly not issues that would keep me from buying this snow blower again. It costs just under $1000 which makes it a really good value when you compare it to some of the similar models from the other brands. I definitely recommend this Craftsman Snow Blower for anyone that has a decent sized driveway with average to moderate snow fall.

If you’re interested in buying a Craftsman Snow Thrower then Sears is the place to get it.