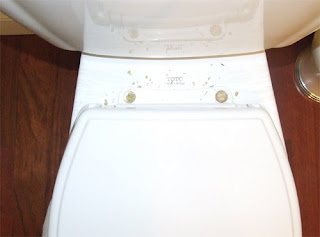 That’s not a dirty toilet in the photo! Those bits and pieces are from the plastic toilet seat bolts that have disintegrated! This is an expensive Toto toilet that I happen to like very well. However, I’m less than thrilled with this defect that has occurred less than two years since we bought it.

Toto was the first company to come up with the SoftClose seat system which eliminates the slamming of toilet seats. The concept is really great but clearly there is a problem with the mounting hardware. I have a sneaky suspicion that the plastic mounting bolts have deteriorated from cleaning products.

One would think that any material used in the construction of a toilet seat and it’s components would be able to withstand chemicals used for cleaning. There is something to be said for metal components to connecting a seat to a toilet bowl. For the prices of Toto products I think they may want to consider using two stainless steel bolts. I’ve sent an email to the folks at Toto to see how they respond. I’ll be sure to post a response if I receive one. I’ll also come up with some type of fix now that my expensive toilet seat is rendered useless with the failure of the plastic connection bolts.

Update:
A reader gave me a tip today about this problem. He said that he’s had this problem before so when he replaced the bolts he applied a coating of Vaseline and that has protected them from further corrosion.