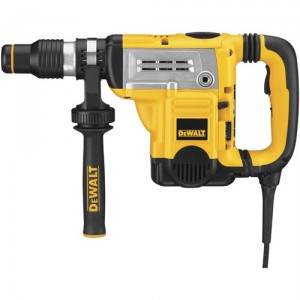 Last summer I had the privilege of traveling down to Baltimore to the DEWALT headquarters where I tested the new line of DEWALT Rotary Hammers. At the media event I was really impressed with some of the great new features on the hammers including the SHOCKS-Active Vibration Control® and Complete Torque Control (CTC)®. Both of the features seemed like great ways to reduce user fatigue and injury while improving productivity.

Thanks to the folks at DEWALT I was able to get the new 1-3/4” SDS Max and Spline combination rotary hammer (D25602K) to test. Over the last 6 months this tool has been used by countless crews at work for a number of jobs including; drilling holes for rebar dowels, drilling holes for seismic anchors, chipping concrete, chipping tile and chipping holes in catch basins.

In fact the folks from DEWALT bragged that we could abuse it as hard as we wanted and it would keep on coming back for more abuse. The only caveat was don’t run it over with an excavator! I had to chuckle at that because some of our excavators have been known to run over tools!

I’m happy to report that after 6 months of torture on the jobsite the DEWALT 1-3/4” SDS Max and Spline Combination Rotary Hammer is working just as well as it did on day one! 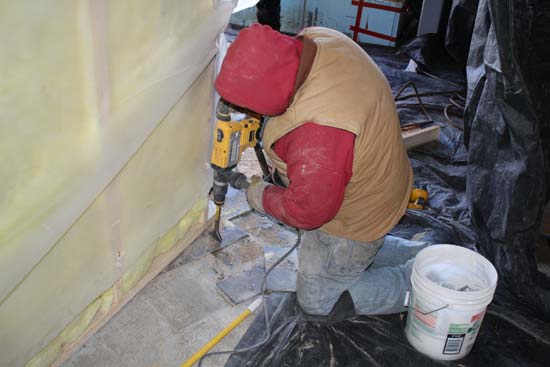 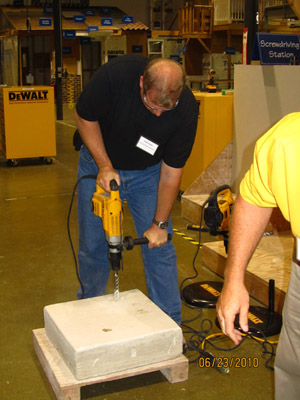 The all new SHOCKS-Active Vibration Control® isn’t just a marketing gimmick, they really work! Anyone that uses a large rotary hammer drill for drilling holes and chipping knows that the vibration will surely shorten your life! (or at least make a long day longer) So the idea of having a hammer drill with built in shocks is genius if it can work.

Not only does the SHOCKS-Active Vibration Control® work well but it feels like less than half of the vibration for a similar model without the technology. As  you can imagine the guys at work quickly chose the new rotary hammer over the old ones!

When I was in Baltimore this summer I had the opportunity to use two hammers, both same size, one with SHOCKS-Active Vibration Control® and one without. The side by side comparison is amazing and the best way to feel the drastic reduction in vibration. 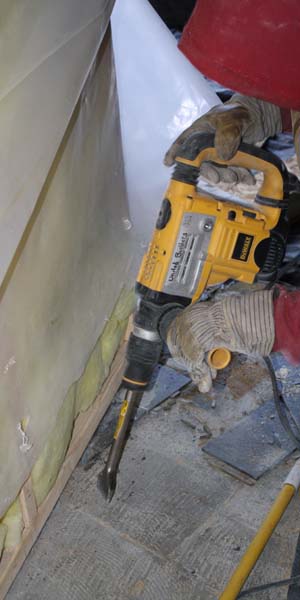 This new hammer weighs in at just over 15 lbs which is relatively light compared to some of the heavy hammers I’ve used in the past that can be well over 20 lbs. You’ll also notice that this hammer is quite small in size and easy to maneuver into tight spaces.

I’m a huge advocate of safety features so the CTC (Complete Torque Control) feature on this hammer is really nice. Hammer drills can “hang” easily when drilling deep holes in masonry leading to some pretty nasty injuries.

Over the years I’ve seen guys get bad wrist sprains, cracked ribs and nasty bruises from large drills that spin out of control.

With the CTC feature the operator can work safer. According to DEWALT:

Another concern from professional contractors is reactionary torque during bind-up situations, such as hitting rebar when drilling holes in concrete. D EWALT addresses this concern with it’s patented two-stage clutch system, Complete Torque Control (CTC)®, which is now offered on the new 1-3/4” SDS Max and Spline combination rotary hammers (D25602K and D25651K). The first clutch setting, which activates at 30 ft-lbs. of torque, will be a sufficient setting for the majority of drilling applications. The second clutch setting, which engages at 60 ft-lbs. of torque, is designed for drilling large holes or coring applications. Once the tool has been unplugged and is then plugged back in, it will automatically reset back to clutch setting one, providing the user the setting with maximum torque control.

The DEWALT 1-3/4” SDS Max and Spline Combination Rotary Hammer (D25602K) is a serious contractor grade tool. I was extremely impressed with it’s comfort, power, versatility and quality. This is a tool that’s been designed for contractors who deal with all sorts of concrete applications including drilling and chipping. Not only would I recommend this combination hammer to other contractors but I can’t find a single thing wrong with it. This tool gets two thumbs up from me!

The D25602K is priced just under $600 and is available from DEWALT dealers and several online vendors including Amazon.