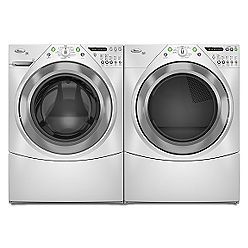 It wasn’t all that many years ago when the only place you saw front-load washers was the laundromat. Today front-load washers are showing up at every store and many homes. This has caused quite the debate among home owners and sales associates about which is better? Front-Load or Top-Load?

By far the biggest advantage to buying a front-loading washing machine is the big energy savings. According to Energy Star the average American family does over 400 loads of laundry each year. Traditional top-load washers use as much as 40 gallons per load while newer front-load washers only use 20 to 25 gallons per load. This results in a 40% or more savings in water use. The result is a savings of over 8,000 gallons of water yearly.

Front-load washers spin at a much higher speed than the older top-loading machines. Today’s front-load washers can spin as fast as 1,500 rpm compared to 600 rpm or less with the older top-loading machines which removes significantly more water during the spin cycle. As a result the energy (electricity or gas) needed to dry clothes is drastically reduced. Estimates from different sources estimate the reduced energy use by as much as 56%.

Front-load washers can washer larger loads of clothing because there is no agitator. Front-load machines are much better for washing large items like blankets, comforters, jackets and other unusual items. Front-load washers are also built today so you can stack them on top of the dryer. This results in a significant space savings if your home needs the extra floor space.

Until recently the front-loading washing machines were significantly more expensive than the older top loading models. However, now that the demand for front-load machines has increased so much the gap between them is shrinking. In fact, we just purchased our first front-load washer and dryer set because the prices have come down so much. Today it’s not hard to find a complete set for under $1,500 where the used to cost $2,000 and up. The difference in price will certainly pay off in a short time period with the energy and water savings.