Frozen Pipes – How To Prevent and Repair

By Todd Fratzel on Insulation, Plumbing

With temperatures dropping below zero here in the Northeast I thought it was fitting to write about Frozen Pipes. Each year thousands of homes are damaged by frozen water pipes. As ice expands inside of a water pipe it acts like an incredibly strong jack that causes most water pipes to burst resulting in damaging floods. 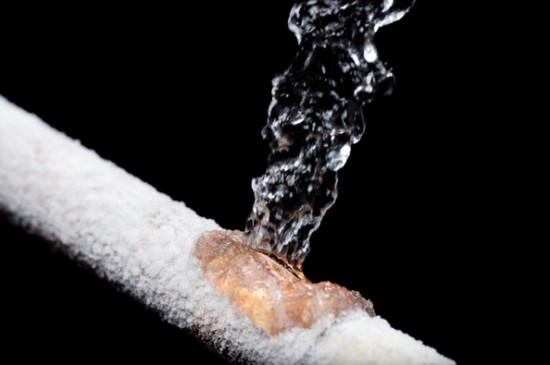 How To Prevent Frozen Water Pipes

Preventing  frozen water pipes in your home should be a top priority if you live in a cold climate. Damage resulting from a frozen water pipe can cost hundreds to tens of thousands of dollars. Preventing your pipes from freezing isn’t that difficult if you know where the trouble spots might be located. The following are the most usual locations for frozen water pipes:

How To Repair Frozen Pipes

If you’re fortunate enough to catch a frozen pipe before it bursts there are some things you can do to reverse the problem. However, if it’s clear that the pipe has already burst it’s most likely time to call in a licensed plumber. Below are some tips for thawing out your frozen pipes.