By Todd Fratzel on Heating

Update: This is a popular article written several years ago. While pricing may have changed the basic comparison still holds true today. 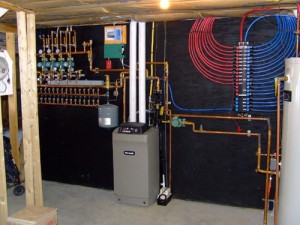 When we built our new house one of the big decisions I had to make was what type of heating fuel to use. Should we use the traditional oil heat that over 90% of people in New England rely on? Or should we use propane (natural gas is not available here in this part of NH).

The answer to that question is pretty complicated when you sit down and think about it. For us I already knew we’d have propane in the house to cook with and for our direct vent fire place. For me one of my biggest concerns with oil was having an oil tank in my basement that could potentially leak some day.

The other big issue to consider was venting the two different types of fuel. An oil fired boiler would require either a direct vent out the side of the house (this is really ugly, stains the house and gets quite hot) or a traditional chimney. Today’s modern gas boilers allow you to vent the furnace through regular PVC pipe up through the roof or wall. To make a long story short I chose the gas boiler. The biggest reasons I chose it was the lack of an oil tank, the venting through the roof and the ability to have a high efficiency boiler.

One thing I really didn’t investigate all that much was a cost analysis of the two fuels. So after last winter and my rather high fuel bills I did some research on the comparison of the fuel costs. It’s not as simple as comparing the price per gallon of the two fuels. Currently (2007) where I live a gallon of fuel oil costs $2.69 while a gallon of propane costs $1.93. So on the face of it propane sounds like a huge bargain to the laymen. The real issue however is the energy that one gallon of each fuel can produce. Fuel oil can generate approximately 130,000 BTU’s while propane is approximately 95,000 BTU’s. However, most oil boilers average about 85% efficiency at best while the gas boilers can produce an efficiency of 95% or more.

Using this data I tried to come up with the cost per BTU for both types of fuel with the assumptions above.

So in this example the propane is slightly more cost effective. Now let me give a big disclaimer here. If you ask a bunch of heating folks most will tell you that typically oil is a better deal. It depends on so many variables and the actual equipment involved. For me what it tells me is the two fuels really are pretty similar in cost per BTU.

For me the fact that I’m burning a cleaner fuel, my boiler has almost zero maintenance, I have no oil tank to leak, I have just water vapor and carbon monoxide exiting my vent, and I needed propane anyway to cook with and run my fire place, the decision still seems to be the correct one for us. I encourage you to look at these issues next time you select a new heating system for your home.

Another PRO that is often overlooked with regard to using propane over oil is tank size. Typically propane users will have a larger tank than an oil user. Homeowners typically have 500 to 1,000 gallon propane tanks while most standard oil tanks are 275 to 400 gallon. On the surface this doesn’t appear to make a difference but it can have a huge impact.

I like to fill up my propane tank in the summer when fuel prices are historically lower than during the winter. The larger tank allows me to buy more propane at a lower price than I could if I was filling up the smaller oil tank during the summer. If you own a 1,000 gallon propane tank that can make a big difference at the end of the year.

Would you like a propane vs oil calculator (spreadsheet)? If so check out our Oil Vs Propane Fuel Calculator.