How To Frame Window Openings 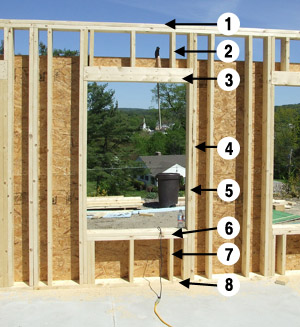 One of the most basic framing techniques involves framing window and door openings. Understanding the anatomy of a framed window opening will help you properly frame both window and door rough openings.

The adjacent diagram shows a traditionally framed window opening from a recent project.  Each of the major components are labeled and described below. It’s worth pointing out that this wall is on the gable side of the building which means there are very minimal vertical loads, hence the small window header.

Doors are framed in the same way as the window shown above without the lower sill and cripples. Obviously there are some small differences depending on local building codes and regional preferences. If you want to learn more about framing a building then I recommend you check out this Book On Framing.