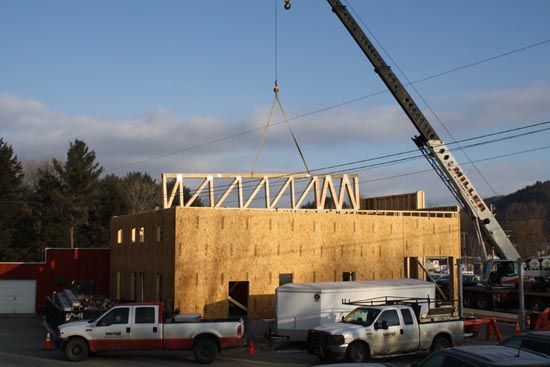 Today I want to quickly share some photos from a commercial building that we’re in the process of constructing this winter. We’re building a major addition for a Chrysler Dealership in Claremont, NH – Lambert Auto Sales. The project involves adding a large new showroom to an existing older building while maintaining some tight property set-backs. In order to accomplish that the architect had to “span” over a corner of the old building with the new.

Needless to say that resulted in some advanced framing and engineering. The original plan actually had a couple columns in the middle of the new showroom in order to support the old roof framing along with the new. I came up with a plan to remove all those columns and span the new showroom with a large girder truss. Basically a girder truss is usually a larger, stronger truss that acts as a beam or girder. The girder truss is then used to support other trusses and/or roof framing members. 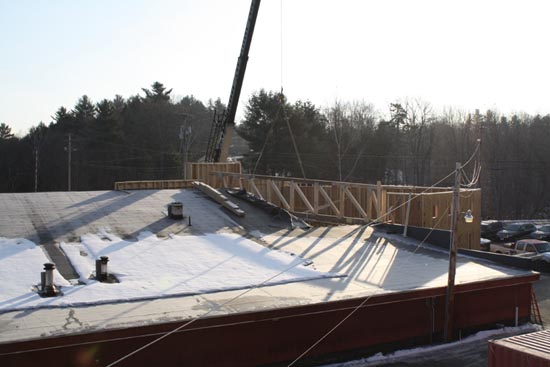 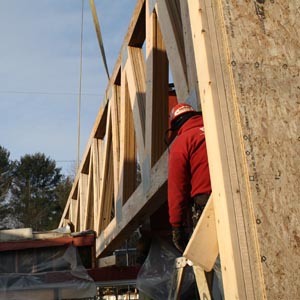 Today it’s possible to span further and hold larger loads with trusses built using engineered lumber. The large girder truss shown in these photos is built with a combination of dimensional lumber and TimberStrand® engineered lumber. This particular truss spans 48 feet and has an average depth of almost 9 feet. It weighs almost 5,000 lbs and will support the new roof (span of 32 feet) and a portion of the existing roof.

The Sky’s The Limit

While you may never need a truss of this size you should be aware of how easy it is to support long spans and large loads with wood framing like this. Truss design and manufacturing have advanced to allow for some really exciting building designs. If you want to eliminate columns, open up large spaces and work with wood products than you’re in luck!

Speak with your local truss manufacturer, architect or engineer for help in designing and building structures like this. You will be very surprised at the few limitations that exist.