By Todd Fratzel on Plumbing

Recently a good friend of mine asked me what might be causing his laundry room to have a sewer smell. Obviously this was a serious problem that needed to be corrected immediately. Not only are sewer gasses an unpleasant experience but they can be a safety concern. If you smell sewer gasses in your home you should try and diagnose the problem sooner than later. 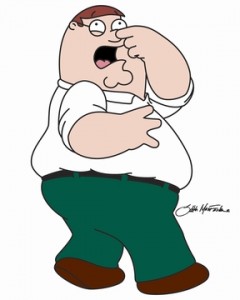 I started quizzing my friend about any recent changes in their home that might have contributed to the sewer smell. He asked me if washing machine mold might be causing the smell or some type of dead rodent.

He wasn’t sure that anything had changed other than they had recently purchased a new washing machine. I knew there was likely something wrong with the plumbing trap (p-trap) which was accounting for the sewer gas smell.

The culprit ended up being the washing machine hose that was incorrectly installed by the appliance delivery guys. Read on to see what happened!

Plumbing traps (p-traps) create a trap in the drain pipes which retain a small amount of drain water which in turn creates a water seal to prevent sewer gasses from entering the living space of buildings. Traps come in several different configurations but they all work the same way by trapping water in the pipe to seal out the sewer gasses. Traps are present for all sinks, showers, toilets and drains (such as washing machine drains). 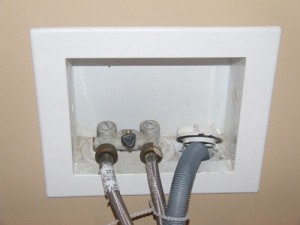 With this set-up waste water comes out of the plastic washing machine hose and empties into the drain box pipe. The waste water fills the trap below and creates a seal that prevents the sewer smell (gasses) from entering the home. See the next diagram for a typical washing machine drain set-up. 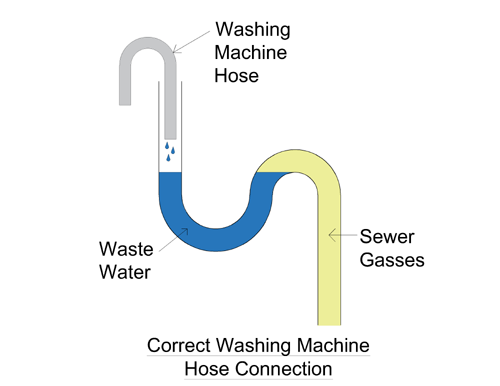 The following diagram shows what happened at my friends house. The delivery guys from the appliance company delivered the new washing machine and hooked it up. The ended up pushing the flexible plastic washing machine drain hose into the drain box and past the P-Trap. 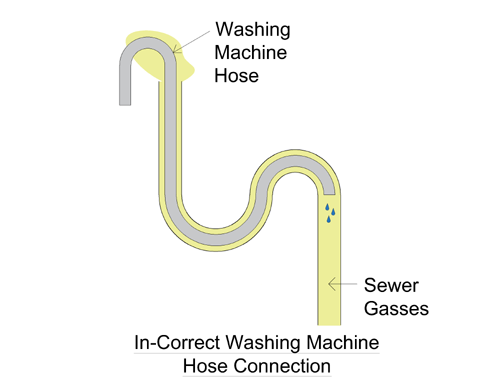 Obviously this was a rare situation and one that I’m still scratching my head about. For the life of me I can’t figure out what the delivery guys were trying to do. However, this just shows you how important the plumbing trap is and how it works.