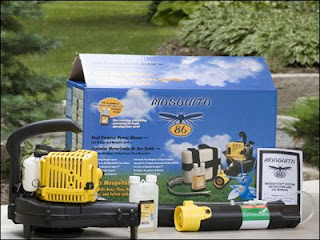 I was sent a mosquito fogger to use and write a review on. With all the rain we’ve had this summer there is still a pretty good crop of mosquitoes flying around our property. So I decided to give this piece of equipment a try and see how it works. The product that I’m reviewing is the gas powered mosquito fogger, Mosquito 86 Agent E.

The Mosquito 86 Agent E fogger uses permethrin as the chemical insecticide. According to the manufacturer: “Permethrin is a member of a pesticide class called pyrethroids, which are similar to the natural insecticide pyrethrum present in chrysanthemum plants. It is effective against a broad range of pests, such as external parasites and flying insects. Permethrin and other pyrethroids are commonly used to control adult mosquitoes. Products containing pyrethroids usually contain piperonyl butoxide (PBO) which makes the pyrethroid more effective in killing insects. Permethrin and other pyrethroids work by over-stimulating the nervous system of insects, causing the insect to die.”

According to Wikipedia permethrin is a common synthetic chemical used as an insecticide. It’s considered safe for most mammals and humans. Permethrin is used in common mosquito and tick repellents. However, permethrin is toxic to fish, honey bees, and small animals such as cats and mice. Overall it appears that this is a widely used insecticide throughout the world for controling mosquitoes. 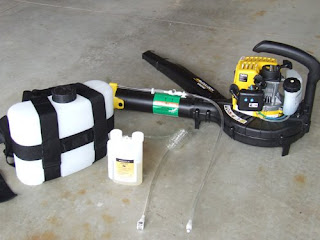 This particular model comes with a 2-cycle gasoline blower from McCulloch. You can buy the entire Mosquito 86 Agent E Blower

from Amazon for about $200. The nice thing about having this mosquito fogger is you also get a pretty nice gas powered leaf blower at the same time. So if you’re thinking about buying a leaf blower and you’d like the ability to kill some mosquitoes, hornets, bees, and other flying insects then this might be a product you’d be interested in buying.

The product is really easy to use. Basically, you take off the normal leaf blower nozzle and insert a special fogger attachment that is supplied with the Mosquito 86 Agent E Blower

kit. There is a plastic container that you put the chemicals into along with cool water. The container is supported on your back with straps. You connect a small plastic hose from the container to the gas powered blower with the special fogger attachment.

Then all you do is fire up the leaf blower and walk around your yard spraying the insecticide. I did this several days ago when the unit arrived and it seems to have helped eliminate mosquitoes and the wasps that were living on our porch. The real test will come next spring when the mosquitoes are as thick as pea soup here in New England. Until then I’d say this is a great mosquito spraying kit plus you get a nice gas powered leaf blower with the deal.