By Todd Fratzel on Product Reviews 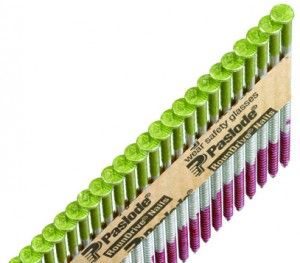 If you use pnuematic nail guns then you know collated framing nails typically come held together in strips by plastic or paper. Over the years it seems as though the plastic collated nails have dominated the market place with very few manufacturers offering the paper version. However, recent changes by some manufacturers has seen an increase in the use of paper collated nails.

The big question is therefore which is better? Paper or Plastic? I’m not sure I have an answer myself for this debate but we have had some great luck recently using paper collated nails. We recently tested several new pneumatic nailers from Paslode and Duo-Fast which all used paper collated nails. We were pleasantly surprised by the reduced occurrences of jambs and the added benefit of not having small pieces of plastic shooting out of the guns at us. 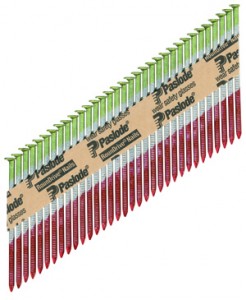 So far our experience certainly justifies the idea that paper collated nails are less likely to jamb and therefore an improvement on crew productivity. Which do you use? Paper or Plastic?