By Todd Fratzel on Maintanence, Plumbing 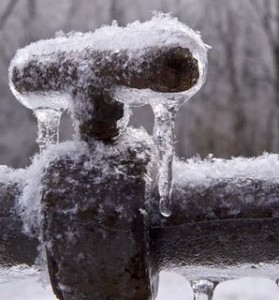 Winter has set in around here with temperatures dipping below zero nightly. The chatter at the local coffee shop the last few days has involved stories from the local plumbers about the huge number of homes with frozen bursted water and heat pipes. If you’ve never witnessed the damage that frozen pipes are capable of take our word when we say it’s almost as bad as having a house fire.

Each year over 200,000 families have the unfortunate experience of dealing with significant water damage due to frozen pipes. Even a very small hole in a water pipe can lead to hundreds of gallons of water per day leaking into your home if no one is around.

This may seem like obvious advice but frankly we’ve seen a majority of frozen pipes located in un-conditioned spaces such as crawl spaces, attics, basements and exterior wall framing. The bottom line is if you live in an area that even has a remote chance of sustained freezing temperatures then you need to keep water and heating pipes out of these spaces. 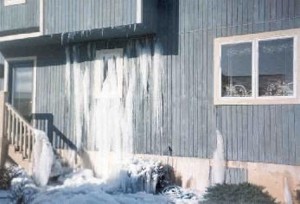 Often we hear folks say that there was just no choice on where to run the pipes. The fact is pipes can be run in lots of different locations and at the very least they can be hidden in soffits, corners of closets and inside interior walls.

Occasionally there is no choice but to run a water line or heat pipe in an exterior wall. On those rare occasions we typically insulate between the wall sheathing and the pipe with the thickest foam board insulation that will fit. Be sure that the insulation is between the cold surface and the pipes. Again we recommend you only do this as a last resort.

Steps You Can Take To Prevent Frozen Pipes

If you live in an older home that has pipes located in some of the trouble spots we’ve listed then there are a few thigns you can do. First of all if you can afford it hire a plumber to relocate problem pipes. The cost associated with moving a problem pipe can be MUCH cheaper than cleaning up devastating water damage. The following tips can also help.

What To Do If Your Pipes Freeze

If your pipes freeze don’t panic. The first thing you should do is shut off the water to the effected area. If you can’t find a shut off inside your home you may need to shut off the main valve in the street. The second thing to do is call your local plumber. The absolute worst and most dangerous thing you can do is applying heat with an open flame such as a blow torch. Plumbers have special heat blankets used specifically for thawing pipes. Chances are VERY good that you’ll discover a leak once the pipes are thawed so having the plumber there to fix the leak is critical.

It’s also a good idea to call your insurance company if you experience frozen pipes. Water damage must be cleaned up properly to prevent mold and mildew damage. Most insurance companies today want to be involved with that clean-up process to protect against expensive mold claims in the future.