Pumping A Septic Tank Out

By Todd Fratzel on Maintanence, Plumbing 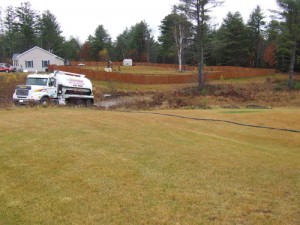 Today we had our septic system tank pumped out. The other day I wrote an article about when you should pump a septic tank out. After three years in our new home today was the day to finally get the septic tank pumped out and inspected.

Septic tanks must be pumped out occasionally in order to remove the sludge, grease and scum that the tanks separates from the sewage before it enters the drainfield. In addition to pumping out the solid waste the septic filter can be cleaned and the tank inspected for any signs of failure. 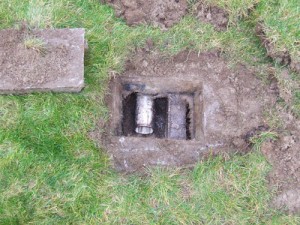 As you can see in the first picture, a large tank truck is used to pump out the tank and transport the sewage to an approved sewage treatment facility where it is disposed of properly. The truck in the photo is capable of pumping out almost 4,000 gallons of sewage at once. In our case the septic tank holds 1,500 gallons which was no problem for the truck.

Septic tanks have several access hatches located on the top of the tanks that allow them to be pumped out and maintained. In the following two pictures you can see the sewer pipe from the house that enters the first portion of the baffled tank and the output sewer pipe that leads to the drainfield along with it’s filter. 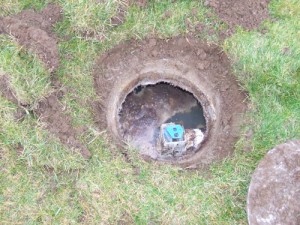 In the last photo you can see the green filter that’s located on the outlet pipe. The filter is the last line of defense against solids and grease from entering the drainfield. The inspector removes it and washes it clean before re-installing it.

It’s been just over 3 years since our septic system went online. Today the inspector was able to determine that we should continue to pump the tank on a 3 year basis. It was definitely interesting to see the amount of grease that had built up in the tank. It was a good reminder to be VERY careful how much grease we put down the drain as grease can cause early failure in septic drainfields.

Cost of Pumping A Septic Tank

Our septic tank is 1,500 gallons in size. Today it cost $472.50 to have the tank pumped out and the filter cleaned. The cost of this is dependent on the number of gallons because the septic pumping company pays by the gallon to dispose of it. So for our area we paid about $0.32 per gallon to have it pumped and disposed of.

Pumping your septic tank out every three years is MUCH cheaper than replacing a drainfield. The average septic drainfield costs between $8,000 and $12,000 to construction. Do the math…pumping is WAY cheaper!