By Todd Fratzel on Basements, Design

Another homeowner has emailed me with questions about insulating a finished basement. This situation is a bit different and I wanted to share it with you. The homeowner recently had their basement flooded with over 4 feet of standing water. The house is located in a flood plain but has never been flooded before. The flood was part of a very unusual flooding event that FEMA declared a disaster. The damage was extensive including cracking and buckling of the existing concrete block foundation walls. The foundation walls have since been repaired and steel reinforcing columns have been installed to shore up the house. The homeowner wanted to know my thoughts on how he should insulate the basement before they create their new “Man Cave”. Below are some of my thoughts about this particular situation. 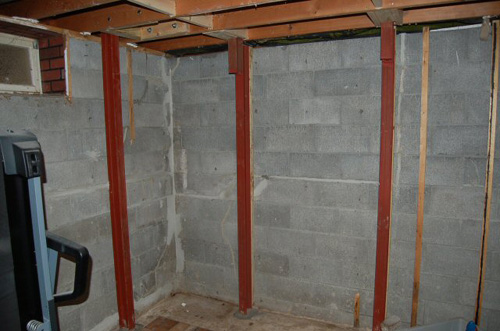 The following items were my thoughts / suggestions to this homeowner regarding his situation.

Finishing Basements In Flood Plains
Deciding to insulate and finish a basement in a flood plain is a risky investment. Even though you may have a dry basement with a history of never flooding it’s quite possible that a flood will over take your house and basement. Flood plains are identified by the U.S. Army Corps of Engineers. These zones have been identified based on historical and analytical data and represent a very likely set of locations for flooding.

So I caution folks to be very wary of spending money and investing in finishing a basement when you live in a flood plain. You are running the risk of severe damage and most likely no insurance coverage on your investment. If you must finish your basement then you should design it in such a way as to minimize the effects of flood waters.