By Todd Fratzel on Garages, Insulation 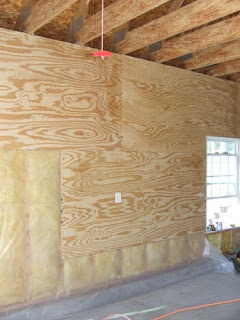 Sheathing the interior garage walls with plywood is a great alternative to drywall. Let’s face it, garages take some abuse and when I see drywall inside the garage I just cringe. Drywall doesn’t do well when it get’s wet, it certainly won’t do well when you slam something against it and it’s a real pain when you want to hang things on the wall. That’s why I prefer using plywood on the walls.

When we built the new house the garage was left unfinished on the inside. There were no stairs the the attic, no finished wall coverings and no storage. I’ve been slowly trying to find time to get the garage finished so it doesn’t look like a bomb went off in there. Last fall I built a staircase to the attic (eventual work shop).

Before cold weather sets in I decided to finally insulate the garage walls and sheath them with 1/2 inch SYP under-layment. I chose the under-layment because it has a rather finished smooth side that I thought would look nice in the garage. Obviously using plywood isn’t as cheap as drywall but it comes with some great benefits. 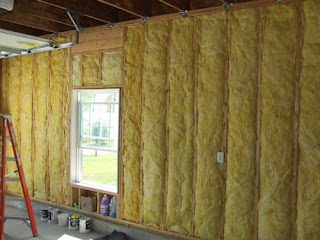 Using plywood on the walls allows me to screws brackets, hooks, shelves and anything I want to the wall without fear of it pulling out. Plywood is very tough and it won’t be getting damaged every time something or someone slams into it. The other nice feature of using plywood is it’s easy to work with. I’m not sure about you but I’d rather hang plywood anyday compared to drywall!

Before I put the plywood on the walls I insulated the garage walls with unfaced R19 fiberglass insulation. I prefer using unfaced insulation and then installing a layer of plastic as the vapor barrier.

The key to a good fiberglass insulation installation 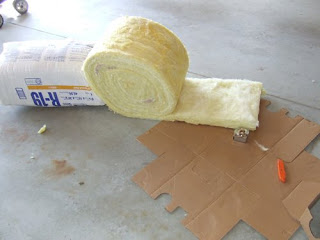 is making sure the insulation has plenty of loft and it’s not compressed into the stud bay. As you can see in the photo the insulation is nice and “fluffy”. I made sure not to compress the insulation especially along the studs.

I still haven’t decided what to do with the ceiling of the garage as far as insulation and sheathing. My problem is decided how to integrate that work with the actual workshop in the attic space. Stay tuned for future posts where I’ll tackle that project. 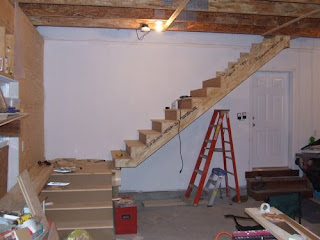 Update:
After getting some comments and feedback I thought it was important to note something about firewall separations. Most building codes require a one hour minimum fire separation between living space and garages. As you can see in the adjacent photo the gable common wall between our garage and the house has been covered with one layer of 5/8 inch thick fire rated drywall. It’s also worth noting that most plywood is fairly safe in a garage because it has a flame spread rating of at least category C which basically means it won’t just catch on fire from an open flame. Just make sure you check your local codes before installing plywood on the garage walls.