By Todd Fratzel on Foundations

Footings are the most basic structural support for buildings in contact with the earth. For houses on a level building lot the footings are very simple and end up all at one elevation. However, for more complicated designs the footings end up changing elevations and therefore require a “step” in the grade. Stepped Footings allow depth of footings to transition from one elevation to another. 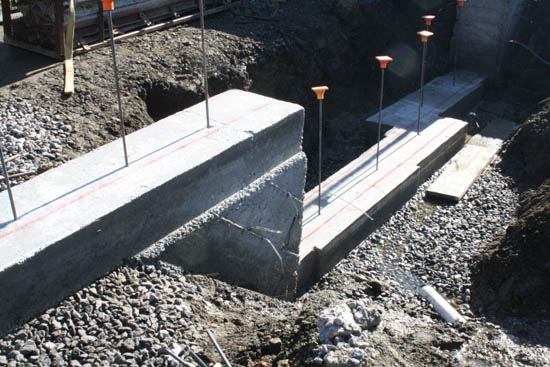 The picture above shows a standard stepped footing for a residential home located in the Northeast. In this example the footing transitions from one grade level down approximately 4 feet to a lower level. The lower level is needed in order to provide frost protection in an area with a walk-out type basement. This is very common in cold climates with walk-out basements.

Another use for stepped footings happens when there is a change in grade from one slab to another. In areas with difficult rock sites the basement might be stepped up (resulting in lower head room) in order to avoid costly ledge blasting.

How Stepped Footings Are Built 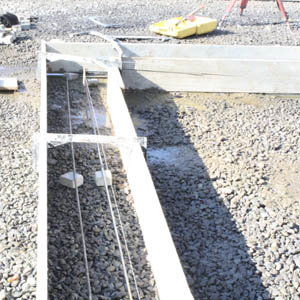 The example above is by far the most common approach to building stepped footings here in the Northeast. The stepped footings are built all at the same time with some fairly rough yet affective methods. The footing is built using the following method:

As you can see from the photo stepped footings are not all that complicated. However, they do make grade transitions for foundations much easier.