By Todd Fratzel on Roofing 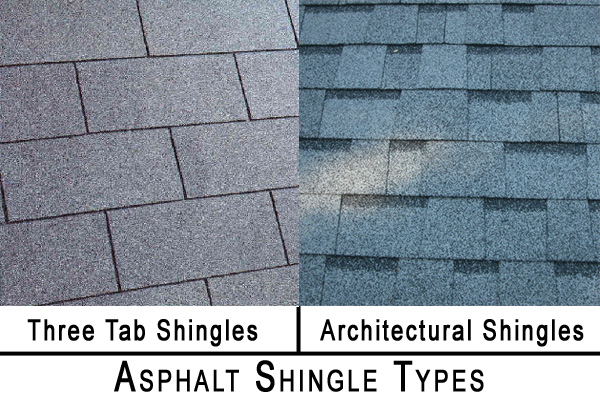 Which Are Better? Three Tab or Architectural Shingles

Recently I was asked what the difference is between three tab and architectural shingles and which are better. As far as I’m concerned there is quite a bit of difference in both appearance and performance. To understand why, you need to look at both types side by side as shown in the image above.

Architectural (also known as dimensional, laminated or composite shingles) shingles are constructed with a heavier base mat which multiple layers of material are adhered to. This gives the “dimensional” shingles a layered or three dimensional look. Whereas the standard three tab shingle contains a flat layer with no dimensional “thickness” to it. Typically architectural shingles weight almost 50% more than the standard 3 tab shingles.

Dimensional shingles were developed in the 70’s for the high end home market. Home owner’s were looking for an asphalt shingle product that had the architectural appearance of cedar shingles while providing the performance of asphalt. By using the layered construction of the dimensional shingle it appears to have texture similar to cedar shakes. Laminated shingles do a much better job hiding imperfections in the roofing structure as well. Another option is to use synthetic roofing shingles which look similar to laminated shingles.

Today laminated shingles are available in many different warranty lengths from 25 to 50 years. Typically, the cost of architectural shingles is only about 20% more than the traditional 3 tab shingles. Some of the higher end 50 year products can be as much as twice as expensive to buy. One thing to consider though is the increased value of your home. laminated shingles help raise the curb appeal of a home and make it more valuable in an appraisal.

I personally prefer architectural shingles for all of the reasons listed above. I happen to live in a development that requires them as part of the architectural covenants. It’s likely that in the coming years standard three tab shingles will begin to fade away in the market as demand for laminated shingles increases. What type do you have on your home?