As summer quickly approaches I wanted to share an archived post about whole house fans and gable attic fans. This post was written to help a reader decide which type of attic fan was best for her home.

Marrisa wrote to me and wants to know about whole house fans vs attic fans.

I’ve been considering installing an attic fan in my house, and wondered what your thoughts were. First, is an attic fan the same thing as a “whole house fan?” I’ve seen sites apparently use the phrases interchangeably, though I don’t know if that’s correct. Second, do these fans save a significant amount of energy versus central air?

There is a huge difference between Gable Attic Fan

and a Whole House Fan 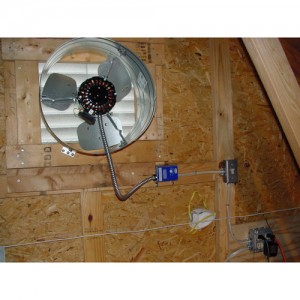 Gable Attic Fans – are mounted to the gable wall inside the attic behind a decorative louver. The gable attic fan is connected to a proper power supply and a timer. The timer allows the fan to run during the hottest portion of the day. The gable attic fan helps reduce the attic temperature to help prevent heat transfer down through the insulation and into the living space. Gable attic fans are typically much cheaper than whole house fans and also easier to install.

Whole House Fans – are mounted in the ceiling between the living space and attic. They are typically located in a central hallway to help evenly remove warm air from the living space. When a whole house fan is turned on it helps draw warm air out of the living space while drawing in cooler outside air from open windows.

This system is most effective when the temperature outside drops below the temperature inside the house. Whole house fans can be very effective in cooling down a house in the morning and evening hours. In some parts of the country they can be a very inexpensive alternative to central air.

Whole house fans typically have some type of louver and/or insulated door that closes when the fan is shut off. This helps keep warm and cold air out of the living space when the unit is not being used.

The other part of Marissa’s question was about installing these units herself. I’d rate the installation of a whole house fan as a difficult / advance home improvement project. I’m not sure I would recommend this project to most DIY folks. Having said that, if you’re really comfortable with electrical work, framing and cutting drywall then you can probably tackle the job. You can probably cut in the unit and get it ready then hire an electrician to wire it up.

Do any of you have a whole house fan? Would you recommend one for others as an alternative to central air?